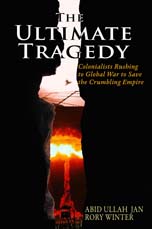 As their façade of democracy unravels the colonial fascists are set to wage another world war. The world cries out for justice as regional wars being waged to maintain their status quo of oppressive colonization fail utterly.

Operation 9/11, the war on Afghanistan, the disastrous occupation of Iraq, escalating tensions with Iran, Israeli terrorist attacks on Lebanon ...these are not isolated acts of extremism and war crimes. They are the first warning signs of a growing desperation in the ranks of colonialists to grab, control and monopolize the world's resources under the guise of a new world order.

With Abid Ullah Jan's incisive and sometimes surprising analysis, you can understand the hidden agenda and the powerful players behind today's news headlines.

Retrieved from "https://literature.fandom.com/wiki/The_Ultimate_Tragedy:_Colonialists_Rushing_to_Global_War_to_Save_the_Crumbling_Empire?oldid=17834"
Community content is available under CC-BY-SA unless otherwise noted.