Profiles in Courage is a 1957 American volume of short biographies describing acts of bravery and integrity undertaken by eight United States Senators.

The book details their acts, often involving decisions that went against their own political party, constituencies, or the national mindset of the time, and suffering criticism and loss in popularity as a consequence.

In 1952, Kennedy was elected as a U.S. Senator from Massachusetts following his three terms in the House of Representatives.

Kennedy was inspired to collect tales of Senatorial courage from reading a passage concerning then-U.S. Senator John Quincy Adams in Herbert Agar's The Price of Union. After consulting Sorensen for further examples, he had collected enough for an entire novel, unlike an article like Kennedy originally envisioned. 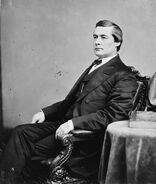 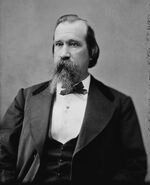 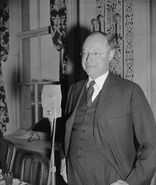 Senator Robert A. Taft
Add a photo to this gallery

Following its release, Profiles in Courage was lauded by critics and went on to win the Pulitzer Prize for Biography in 1957. Kennedy's father, Joseph P. Kennedy, used his connections to ask Arthur Krock, his political adviser and longtime member of the prize board, to persuade others to vote for it.

The book returned to bestseller status in 1961, following Kennedy's election to the U.S. Presidency, and in 1963, following his assassination.

In 1957, on The Mike Wallace Interview, journalist Drew Pearson appeared as a guest and stated live on air: "John F. Kennedy is the only man in history that I know who won a Pulitzer Prize for a book that was ghostwritten for him." Later acknowledging Sorensen's contributions to the novel and further adding: "You know, there's a little wisecrack around the Senate about Jack ... some of his colleagues say, 'Jack, I wish you had a little less profile and more courage."

It was later reported that the statement, "I wish that Kennedy had a little less profile and more courage" was actually made by former First Lady Eleanor Roosevelt.

Retrieved from "https://literature.fandom.com/wiki/Profiles_in_Courage?oldid=26849"
Community content is available under CC-BY-SA unless otherwise noted.