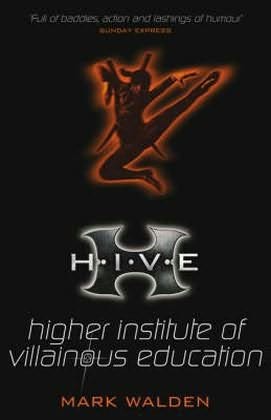 Higher Institute of Villainous Education, the first book in the H.I.V.E. series, is a novel for young people by Mark Walden. It was first published in September 2006 and there have been four different editions.

The titular institution (also known as H.I.V.E.) is a top-secret school of applied villainy where children with a precocious talent for wrongdoing are sent to develop their talent into criminal mastermind. After all, 'Villains have the best lines and wear the best costumes in films".

One small catch is that the teenagers cannot leave until their training is complete, six years later.

'With villainy comes a certain freedom of thought, and every year one student in particular will show extraordinary talent - after all, it takes the best to produce the worst.'

This year there are two students, Otto Malpense and his best friend Wing Fanchu, and they are not keen on staying in the school for six long years.

Retrieved from "https://literature.fandom.com/wiki/Higher_Institute_of_Villainous_Education?oldid=12226"
Community content is available under CC-BY-SA unless otherwise noted.