Dodger is a non-Discworld novel written by Terry Pratchett. It follows the story of a young lad from the streets of Victorian London who, on a grim night, leaps to the defense of a young woman who is being attacked. Once seeing off the brutes he returns to find two gentlemen looking over the girl and together they all decide to look after her and her well-being. 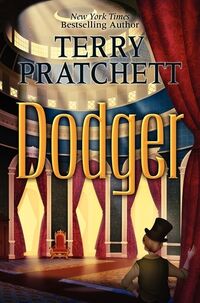 A storm. Rain-lashed city streets. A flash of lightning. A scruffy lad sees a girl leap desperately from a horse-drawn carriage in a vain attempt to escape her captors. Can the lad stand by and let her be caught again? Of course not, because he is Dodger.

Seventeen-year-old Dodger may be a street urchin, but he gleans a living from London's sewers, and he knows a jewel when he sees one. He's not about to let anything happen to the unknown girl—not even if her fate impacts some of the most powerful people in England.

From Dodger's encounter with the mad barber Sweeney Todd to his meetings with the great writer Charles Dickensand the calculating politician Benjamin Disraeli, history and fantasy intertwine in a breathtaking account of adventure and mystery.

Retrieved from "https://literature.fandom.com/wiki/Dodger?oldid=13990"
Community content is available under CC-BY-SA unless otherwise noted.